Gary Listened to the People Who Knew What Should Be Done

As Gary Comer surveyed the icy waters around him, he knew something wasn’t right.

The avid sailor and founder of Lands’ End had just navigated his yacht Turmoil through the Northwest Passage—a historic route in the Arctic Ocean known for its treacherous swaths of pack ice. The conditions had dashed early explorers’ hopes of establishing a trade route connecting the Atlantic and Pacific Oceans. But now, in 2001, Comer and his crew had made the voyage with relative ease. Why, he wondered, had conditions so drastically changed?

A year later, the great scientist Wally Broecker was sitting at his desk at Columbia University’s Lamont-Doherty Earth Observatory in Palisades, New York, when a letter arrived from Land’s End. 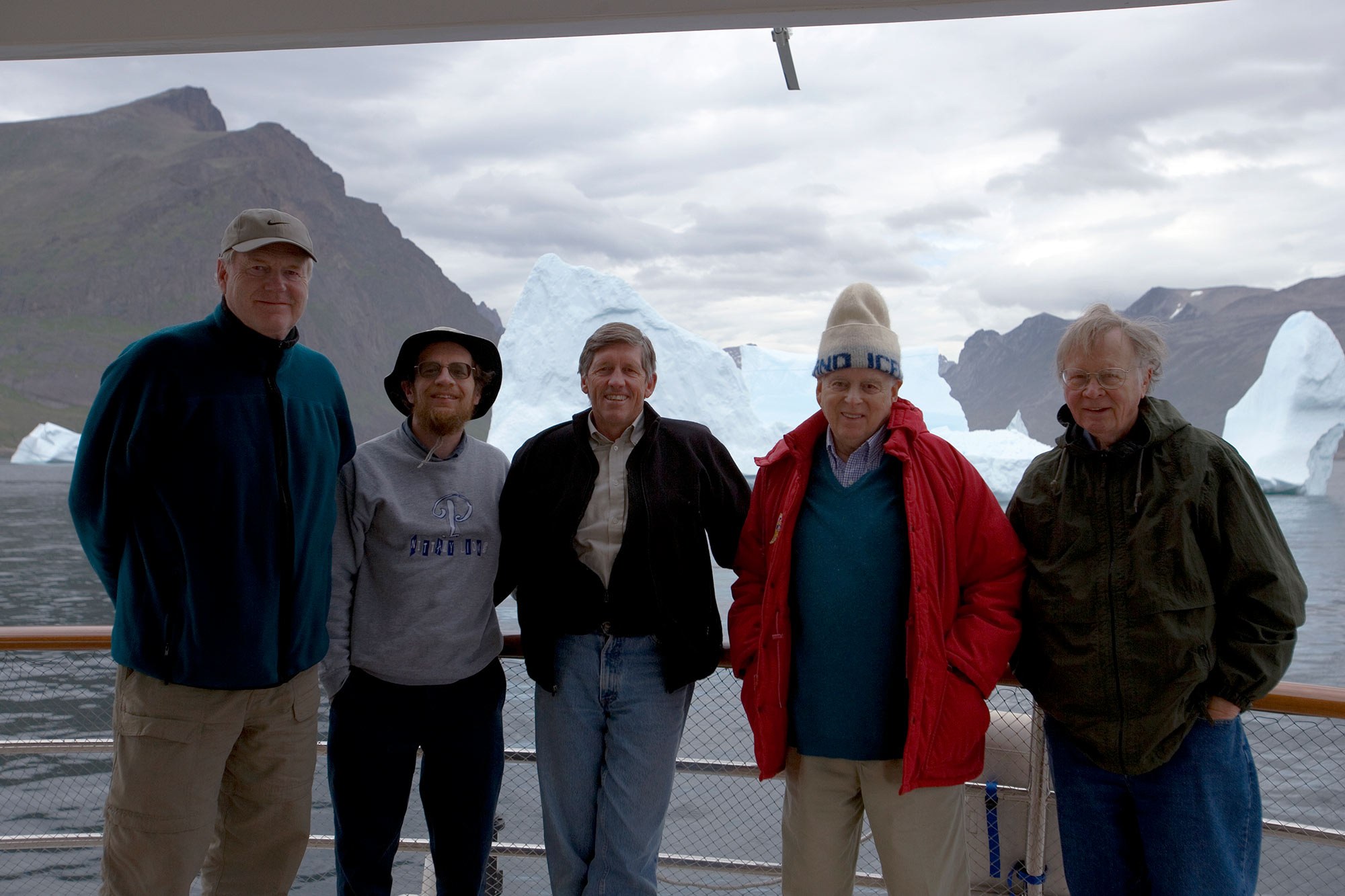 “I didn’t know anything about Lands’ End, and of course I didn’t know who the hell Gary was. Luckily for me, someone recommended he talk to me because I was known for climate and the oceans.”

A field-changing researcher who coined the term “global warming,” Broecker had authored 450 journal articles and 10 books, as well as mentored a new generation of aspiring scientists, over his long career. By April 2002, at the age of 71, he was ready to retire.

But this message piqued his interest. During a brief phone call, Comer told Broecker about his voyage and explained that he wanted to know more about climate change. Not long after, the Chicago-based entrepreneur flew his private jet to Teterboro, New Jersey, to meet Broecker.

"So he flew into Teterboro and stayed in the Clinton Inn in Tenafly and we agreed to meet at breakfast. By that time, I had found out that he was a billionaire [laughs], so I didn’t know what to expect. He was sitting there drinking coffee and he had his usual slipover sleeveless sweater on and he looked like an ordinary man. And I sat down and he said, 'Well, Wally what can I do for you?' Well, when a man of that wealth says that you [makes gasping noise], so I said I better think about that."

Initially, Broecker asked for a new greenhouse for Lamont—a $9,000 project. Comer had bigger things in mind, however, and called a few weeks later to propose a project beyond anything Broecker could have imagined.

He said he wanted to create a group of 25 or so mentors around the world that would work on abrupt climate change [and] he wanted me to choose who these people were,” Broecker said. These scientists would receive funding and be able to choose two or three promising post-docs for the Gary Comer Abrupt Climate Change Fellowship. The award would provide $110,000 annually per student for three years. Broecker’s choices would be added to an existing group of eight researchers chosen by Dr. Sherwood Rowland — a scientist specializing in atmospheric trace gases who Comer had met a few years earlier.

“I picked all these people, so of course I made a lot of friends,” Broecker recalled, laughing. When Rowland later left the group, two men stepped up to lead with Broecker: George Denton, a professor at the Climate Change Institute & School of Earth and Climate Sciences at the University of Maine and Richard Alley, Evan Pugh Professor of Geosciences at the Pennsylvania State University. Over the following years, Denton, Alley and Broecker enthusiastically shaped the program, working closely with Comer to identify promising research projects that could benefit from initial funding to make key discoveries, and to gain the momentum and information necessary to secure additional funding from other sources, such as the National Science Foundation, in later phases.

Denton, Alley and Broecker also selected a few other scientists to form the Changelings, a smaller group dedicated to brainstorming about abrupt climate change. To further their efforts, Comer sponsored and attended the Changeling’s trips to remote field sites. Through this collaboration, the group pushed research faster and further than would have been possible with business (and funding) as usual. Comer and the Changeling’s trips to Iceland and Greenland in 2003 and 2005 were remarkably productive and allowed the scientists to achieve a summer’s worth of results in one or two days.

Using Comer’s boat, float plane and helicopter, the scientists gained access to remote field sites and a comprehensive view of the landscape that would not have been possible any other way. With this new information, they could better address several of their key questions, such as the history of melting from the ice age to present day as shown through the dated records of raised beaches.* see footnote

In addition, with Comer on board, the researchers learned how to communicate their research and findings to someone without an extensive scientific background—a key skill for building public support and gaining media coverage for their work.

Comer’s infusion of money and resources drove a surge of new findings and publications. To help the researchers keep up with one another’s work, Comer organized a meeting where the postdocs could present posters while their mentors served as main speakers.

The first of these gatherings was held at the IBM Customer Executive Education Center in Palisades, New York. The scientists arrived from across the world, expecting the same formal academic atmosphere of other meetings, only to be met with fruit baskets, congenial dinners and a funder who was eager to learn about who his awardees were both as scientists and as people. Working with Comer, it seemed, would be markedly different than any former partnership.

"Often, science is bitter competition and in my field, when I was a student, some of the stuff that went on was just bizarre. So when he held this meeting at IBM, it was so relaxed and I think a lot of people who had been uptight about it realized it was much more fun to be open, so I think it helped the whole field in another way besides money. It changed the interaction among people."

The first program was so successful that Comer made the conference an annual event that was later moved to his property in rural Wisconsin. There, the tradition of camaraderie continues. During the day, scientists share the most cutting edge research on abrupt climate change, while the evenings bring fireworks, communal dinners and walks on the property.

Over the next few years, Comer also provided venture capital for a CO2 capture startup proposed by Professor Klaus S. Lackner, director of the Lenfest Center for Sustainable Energy at the Earth Institute; became the naming donor of Lamont’s new Geochemistry Building; sponsored climate change research at Woods Hole Oceanographic Institution in Massachusetts; and was the third author on a scientific paper. Today, a total of 320 professional journal articles have been published with acknowledged Comer support.

By the time Comer passed away from cancer in 2006, his initial $9,000 donation for Lamont’s new greenhouse had grown into a roughly $45 million gift. At one point, Comer was providing more money to climate change research than the United States’ government. His funding, as well as the spirit of camaraderie he brought to those with whom he worked, forever altered the field of climate science and the lives of established and aspiring researchers across the globe, including Broecker himself.

“If it weren’t for the Comer foundation, I’d be retired or dead,” he said. I was approaching 70 when he got in touch with me and so he just jacked me up and gave me a lot more to think about and do, and he gave me a lot of responsibility.”

Broecker went on to write many more scientific papers, and—along with Alley and Denton—to serve as an inspiring mentor to the Comer-funded post docs. Gary Comer’s legacy, according to Broecker, was the revolution of funding for scientific endeavors. 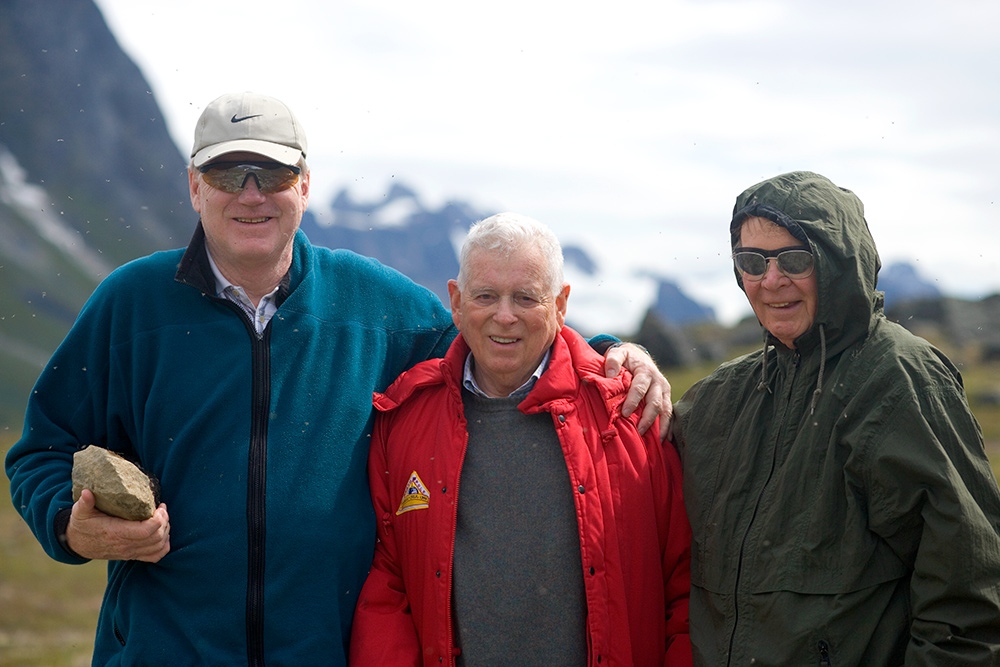 George Denton, Gary Comer and Wally Broecker in Greenland in 2005.

“Most foundations hire administrators,” Broecker said. “They get very bureaucratic. They accept proposals—God knows how they evaluate them. [Gary] listened to the people who knew what should be done.” "Gary showed the world how to do this. Somehow that should be publicized. If you have a lot of money, Gary showed how you can enjoy spending it and spend it in a way that really helps humanity. Pick an area of research and get to know the key people in it. Help them. Cheer them up. Give them some good dinners. [Laughs]. Yeah."

*footnote: The great weight of an ice sheet pushes the land down beneath it. As the ice-age ice melted, the water that was released raised sea level, and the land that had been pushed down began rising. However, because the sea rose faster than the land, some areas flooded, and then slowly rose out of the sea. Beaches formed along the shore, and then the rising land lifted these beaches above the sea level while new beaches formed. The history of beach formation—when, and how high now—provides important information on the timing of ice melt, and how much ice there was. During flyovers, Broecker, Alley and Denton identified the locations of raised beaches, and then visited them to collect shells. Using radiocarbon, they dated the shells to reconstruct the history of each area.